This article is the second of a 4-part series dealing with Property Boundaries, and relates to Boundary Presumptions. The common law is law that is made, not by statute, but by decisions of the higher courts (Divisional Court, Court of Appeal and House of Lords) and which have been built up over the years. Courts of lower jurisdiction are bound by law to follow these decisions (known as decided cases, or case law). Over time, cases involving land law have resulted in decisions relating to property boundaries, where presumptions can now be made as to the legal position where there is no rebuttable evidence opposing them. Rebuttable evidence would normally be apparent from the documents in a Boundary Search. As boundary presumptions are based on decisions of the higher courts of the land, this article is updated regularly as and when court decisions affect them. The articles in this series will help you to understand every aspect of Boundary Disputes in England and Wales. Articles 1-4 can be read by selecting the page tab above the heading of this page. 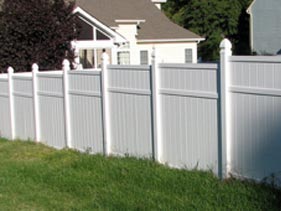 There is no presumption in England and Wales that the boundaries of a fence on the left side of the garden belong to one neighbour and the fence on the right to the other. This is a common misconception.

There is also no presumption with regard to fence having struts or piers, but it is normal for the following conventions to apply:

Where a fence has struts on one of its sides the owner will usually place the struts on his side of the boundary and the fence itself to an inch or so from the boundary, because he will be careful not to encroach on the neighbouring property. Where a fence is supported by upright posts on one side the same convention is likely to follow, with the posts on the owner's side.

New fences can be erected on a person's land as a boundary alongside an existing boundary fence, if so desired, so long as it does not interfere with the neighbour's property.

The Law of Property Act 1952 provides a statutory provision enabling a court order to be acquired where a fence adversely affects the adjoining property.

Where the boundary is a garden wall, ownership of that boundary is presumed to be on the side of the wall farthest from the garden of the owner who erected the wall. It is presumed that the owner would make certain to build with the external face on the edge of his own land.

Where the wall is a wall separating one house from another, e.g. where the house is terraced or semi-detached, ownership of it is dictated by the Party Walls Act 1996. There is a legal presumption that a party wall is jointly owned by each house owner, with the centre line being the boundary. This presumption can be rebutted where a Party Wall Notice has been agreed indicating a different ownership arrangement.

Where there is a dispute as to the height of a garden wall or fence there may be a restriction in the title register or the conveyancing deeds, which would be enforceable by applying to the county court for an injunction, should the height restriction be exceeded.

It is presumed that ownership of a flat includes the external walls even though the landlord is usually required to maintain the exterior. The lease plan will show flat boundaries, whether vertical or horizontal.

Ownership of trees and shrubs belong to the owner of the land upon which they are growing. This applies to roots and branches that protrude onto the adjoining property. The adjoining owner has the right to cut them back and should return them (and any fruit) to the owner. Only that part protruding can be cut back. It is illegal for the owner of an adjoining property to use poison to kill off roots growing onto his land as doing so would kill the tree. 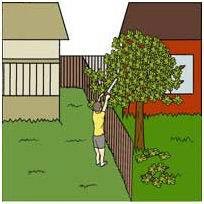 It has been held by the courts (Hunter v Canary Wharf 1997) that any lopping of overhanding branches can only be carried out by the owner, not by employees, lodgers, guests or family who do not live at the property. It was held that the nuisance could be because of branch encroachment, damage to the land or interference with the neighbour's quiet enjoyment, e.g. by preventing sunlight from reaching his plants.

Where a hedge and a ditch separate properties there is a presumption that the boundary lies on the farthest side of the ditch from the hedge. This is based on the surmise that a person would dig the ditch on this own land and pile the soil at the side of the ditch, on his own land, using it for the planting of the hedgerow.

A recent Court of Appeal decision, Pamar v Upton 2015, confirms that the ditch and hedge presumption remains valid today, so long as there is no rebuttable evidence to the contrary. In this case the ditch and hedge were present prior to the earliest surviving conveyance of the property, and therefore, the documents available could not override this presumption.

It is presumed that the legal boundary will extend to the centre point of the road immediately facing the property opposite, so that each house owner along the road will own the relevant section of the road facing their house up to the centre of it. The Land Registry documents do not indicate ownership extending beyond the curtilage of the property, but that is an administrative convenience and does not affect the actual ownership.

The boundary of land that adjoins a non-tidal river is presumed to reach out to the centre point of the river. The boundary will change whenever the natural course of the river changes, as it usually does over time.

This presumption does not apply to an island in a tidal estuary, as the Crown would own this.

There is no presumption as to ownership of a lake, save where it lies entirely within the boundary of a property, in which case it is owned by that property owner.

Land that stretches between the high tide and low tide of an ordinary tide, i.e. not a spring tide or a neap tide, is owned by the Crown, although the Crown may let the property.

The presumptions relating to rivers does not apply to a canal or its towpath, which remain outside the ownership of the adjoining land owners.

Where the eaves or foundations of a property project beyond the boundary they will not be shown in the title plan or in any deed plans as so extending, because these plans usually provide the view at ground level. In such instances although the projected parts of the property will be included within the property ownership, ownership of the airspace downwards from the projecting section of the eaves or upwards from the projecting section of the foundations will not be included.

The title register will refer to mines or minerals where these have been excluded from the title because the rights have been sold off separately, or belong to the Crown.

Where properties adjoin and the upper part of one extends above the lower part of the other this is known as a flying freehold. Again, the Land Registry will note the two title registers accordingly.

Other Articles in this Series

The Title Plan shows an outline of the property and its immediate neighbourhood, and uses colours to identify rights of way, general boundaries and land affected by covenants.

Deeds creating Restrictions, Covenants, Easements, etc. are often kept digitally by the Land Registry and made available for sale due to their invaluable detail and content to assist in further understanding the Restrictions, etc.