Although Land Registry documents rarely contain measurements of boundaries, some of the paper documents they scan and retain digitally often do. The boundary dispute referred to in this article was resolved by obtaining a Boundary Search that contained a Deed Plan endorsed with measurements. The disagreement related to a small strip of land only 3" wide. The measurements in the Plan were sufficiently detailed to resolve the dispute.

Mr Jones wished to erect a double storey extension to the side of his house. Plans drawn by him where inspected by his neighbour, Mr Wilson, after they were submitted for planning approval, and he alleged they were protruding into his garden by 3 inches. The boundary in question was examined by both neighbours, but they were unable to decide where the true boundary lay.

Mr Jones obtained a Boundary Search for £89.95 With the search was a copy of the original Conveyancing Deed from when his property was first erected. Attached to it was a Deed Plan.

Deed Plans are often no more than drawings but they are authoritative in nature and unlikely to be challenged. Sometimes they contain measurements and angles. They are attached to one of the Conveyancing Deeds, usually near the end of the Deed. The existence of Deed Plans is only generally known about because the Title Register often quotes part of them and refers to any plan attached to them. Most people wrongly assume the reference is to a Title Plan, but a careful reading of the text will show it is referring to a Plan contained within the Deed that is being cited. Our Boundary Searches always include copies of all copied Conveyancing Deeds and Deed Plans.

This is a copy of the Deed Plan: 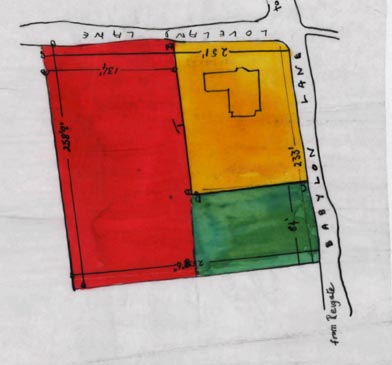 The Deed Plan contained a hand-drawn image of the property and the two adjoining properties. Each property had the precise measurements of their length and breadth. From this it was possible to conclude where the exact boundary line lay, in this case on the far side of Mr Jones's proposed foundation line. Thus, he was able to complete the building of the extension.