A right of way can come into existence by prior use, provided certain conditions apply, e.g. where X regularly uses a path across part of his property to get to another part of his property. If he subsequently sells one of those property parts to Y, then Y may be able to claim an easement by X's prior use, even though X's use was not as an easement. This is because there cannot be an easement such as a right of way on 2 parcels of adjoining land owned by the same person, but if they were owned separately there would need to be an easement to use that path.

To explain a right of way by prior use it is probably best to use an example. X owns a large property. At the rear of the garden is a stream and a bridge to another part of his garden. Below is what the property looks like on a rough plan:

The pink and green squares represent the two parts of X's garden, divided by a stream (blue). There is a bridge (red) across the stream, and X regularly uses this as a shortcut to a rough track at the rear of the green part of his garden. X.s house is shown as dark grey. The public road adjoining his house is shown as the wide grey line and the rough access lane at the rear of his garden as the thin grey line.

X has always used the footbridge (red) to access the rough access lane, using a path marked with a dotted line.

X then divides his property and sells the part shown in green to Y, but Y was not granted an easement as he enjoys access to the green property via the rough access lane. The lane is not very convenient, however, and Y learns that X used to regularly pass between his house and the lane by using the footbridge. Although X's use of the path could never have been an easement (which requires 2 adjoining parcels of land in different ownerships), it was used like one and is regarded as a quasi-easement. Y would clearly benefit from use of the path, to access, by foot, the village pub (dark grey) on the main road and would be entitled to claim a right of way by prior use. 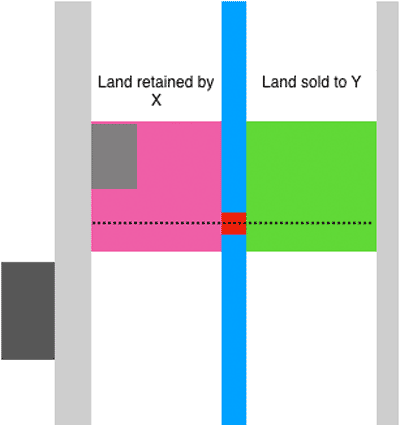 The possibility of claiming a right of way by prior use could come to light after examining the vendor's Title Register and Title Plan before the property was purchased, by obtaining a Prior copy of these documents, and also by looking at his conveyancing deeds which may contain one or more deed plans. In the case above it would be obvious that the vendor would pass along the bridge to the green area on a regular basis.

The Boundary Dispute Search provides copies of all available Land Registry documents for the properties on each side of the boundary, together with details of common law presumptions that will apply where there is no evidence to the contrary.

Parking Dispute searches provide details of all registered documents that contain references to parking spaces, drives, etc, whether on street or off street