Which fence do we own?

Finding out who owns a fence

In England and Wales, there is no legal presumption that a person owns or must maintain a fence or other boundary barrier on the left or on the right. Ownership of the boundary is normally determined by the builder who erects the buildings. Modern buildings will usually have a detailed Transfer Deed that specifies ownership of the boundary fences. More often than not, however, it will be necessary to look at the ownership documents each side of the boundary, and sometimes even for the houses at the two ends of the street. These documents would include the Title Register, Title Plan, Conveyancing Deeds, Deed Plans, and, if Leasehold, the Lease and Lease Plan for each of the properties adjoining the boundary. These documents are all included in a Boundary Search.

Example of Boundary Fence Ownership in a Road

Where a developer creates 5 properties from a plot of land owned by him, there will be 4 dividing boundaries and 2 end boundaries (6 in all) as in the example below. This means that at least one of the properties will own at least 2 of the boundaries; thus there can be no presumptive rule of ownership on one side or the other. 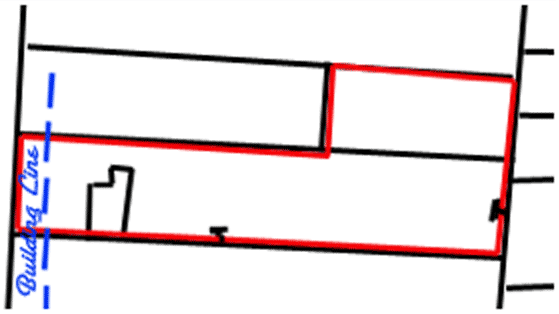 This sample shows T marks on two of a property's boundaries. The bars of the T clearly show the owner of these boundary structures to be the property owner who owns the land within the red edging.

The following Boundary Presumptions or Conventions will normally apply, subject to rebuttal by evidence to the contrary:

The Law of Property Act 1952 provides a statutory provision enabling a court order to be acquired where a fence adversely affects the adjoining property.

Where the boundary is a garden wall, ownership of that boundary is presumed to be on the side of the wall farthest from the garden of the owner who erected the wall. It is presumed that the owner would make certain to build with the external face on the edge of his own land.

Where the wall is a wall separating one house from another, e.g. where the house is terraced or semi-detached, ownership of it is dictated by the Party Walls Act 1996. There is a legal presumption that a party wall is jointly owned by each house owner, with the centre line being the boundary. This presumption can be rebutted where a Party Wall Notice has been agreed indicating a different ownership arrangement.

Where there is a dispute as to the height of a garden wall or fence there may be a restriction in the title register or the conveyancing deeds, which would be enforceable by applying to the county court for an injunction, should the height restriction be exceeded.